One of Jupiter’s stripes went missing Earlier this year. The Southern Equatorial Band (SEB) started to get lighter and paler, and eventually disappeared.

Now, follow-up images from both professional and amateur astronomers are showing some activity in the area of the SEB, and scientists now believe the vanished dark stripe is making a comeback. 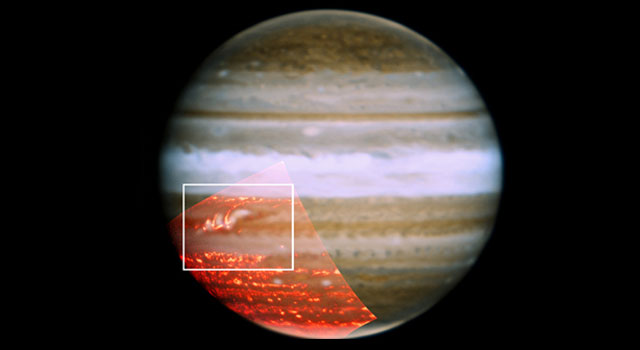 The reason Jupiter seemed to ‘lose’ this band – camouflaging itself among the surrounding white bands – is that the usual downwelling winds that are dry and keep the region clear of clouds died down,” said Glenn Orton, a research scientist at JPL.

The stripe, known as the South Equatorial Belt (SEB), is located just south of Jupiter’s equator and can be seen with amateur telescopes. It is usually brown, but last spring, it turned white. In early November, amateur astronomer Christopher Go of Cebu City in the Philippines observed a prominent bright spot in the unusually whitened belt – which astronomers are calling a “storm’ on Jupiter. This bright spot caused professional and amateur astronomers around the world to turn their telescopes toward Jupiter.

After follow-up observations with NASA’s Infrared Telescope Facility (IRTF), the 10-meter Keck telescope and the 8-meter Gemini telescope, all atop Mauna Kea in Hawaii, scientists now believe the stripe is making a comeback.

The white band wasn’t the only change on the big, gaseous planet. At the same time, Jupiter’s Great Red Spot became a darker red color. Orton said the color of the spot – a giant storm on Jupiter that is three times the size of Earth and a century or more old – will likely brighten a bit again as the South Equatorial Belt makes its comeback.

1 reply on “Jupiter is getting back its lost belt”