What do we know? We means human beings. Through the millennia we have acquired a great deal of knowledge. We know about stars, their planetary system, our Earth, life forms on this Earth, laws governing various bodies etc. etc. We think we know about physics, chemistry, biology and all in great depth. But, do we? In a sense, we know a great deal about these all. These are not truly unanswered questions. Science has got its own hypotheses about these questions. But one truly unanswered question is – Death. Actually it is a paradox. There are numerous beliefs and questions surrounding it. Some say, death is ‘The End’ of life. But from time immemorial, people preferred to believe in life after death. The early Egyptians preserved their dead bodies for the next birth. Those mummies, embalmed in unknown chemicals, still prevent decay of the dead bodies. .

Almost every culture across the world believe that death is just the beginning of another phase, where you will be treated according to your doings during life. The concept of hell and heaven is there in all religions and cultures. The good will be treated well in heaven, while the bad have to undergo several very cruel punishments. 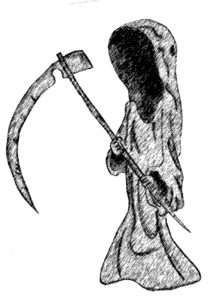 I personally feel that, this concept of hell and heaven was introduced to make people good. So that, they won’t fight, kill, or steal and on the contrary will obey laws, be humane and kind. Yes! This great concept is meant to create a better world. But, do we still behave properly to earn a place in heaven?

Science has done little to increase the knowledge about death. May be that’s the reason why philosophical ideas have been put forward about death and its various aspects. Life after death is a good concept too. This help us relieve the pain caused by the death of a beloved one. We believe that they can see us from above. We believe, they will help us during difficult times. The belief that they are still with us, helps us fill the vacuum created by his/her death.

Death is not the complete removal of a person from all Earthly systems. He may not be physically present amongst us, but he still lives in our hearts. Yes, he IS with us. But, some create unnecessary fear in our lives in the form of ghosts. Ghosts are said to be evil spirits. They wander around because they have unfulfilled wishes. Ghosts are said to be spirits of victims of violent deaths. They have been wronged, and will seek vengeance.

There have been numerous stories of ghosts and paranormal activities around the world. One such example is the ghost of Abraham Lincoln seen by many in The White House! Science is very much interested in ‘ghost activities’ and a branch of psychology – parapsychology is devoted to study such cases.

Sceptics prefer to believe that there is a scientific explanation to such activities. Some like the supernatural way. Anyway, it is a mystery now.
Oops! I forgot to mention one thing concerning life after death. It’s re-birth. Re-birth is an after effect of after life. After a certain period of time spend in another world (either hell or heaven), every soul is allowed to re-enter our Earthly system. This is re-birth. They may or may not be in human form.

According to Hindu mythology, every life of a soul is determined by his activities in the previous lives. Only the pure will get human form. There have been many reports of re-births around the world. Death is in a shroud of mystery. Science keeps mum in this topic. Various cultures have introduced
various beliefs and customs surrounding death. They sketches death by their beliefs. But, the fact is that the beliefs surrounding death in various cultures have striking similarity. After life, re-births, hell & heaven, ghosts etc are present in beliefs across the globe.

This article is written by guest author Bachelor Of Suspense. He blogs at Anything Everything and for more interesting articles like this, you may visit his blog.

5 replies on “The Final Act”

maybe after death,people can use the 4th spacial dimension………that explains why they are invincible and can appear and disappear anywhere anytime.
i wanna die…….

Nice to see original content for once on a blog ! nice

Have you considered installing the db-cache plugin ? It will help your site load faster.

Doing some browsing and noticed your blog looks a bit messed up in my K-meleon internet browser. But fortunately hardly anyone uses it any longer but you may want to look into it.